Puffs to Perfs:  The Story Behind ELSNER's Rotary Perforator

Great innovation is almost always the result of a problem solving.   Today, you’ll learn how a common problem while doing laundry in the 1960s lead to the innovative approach for perforating nonwovens on nonwoven converting machinery designed here at ELSNER.

In the late 1960’s, Conrad Gaiser wanted a way to make things easier for his wife.

She constantly had to hurry down from their 4th floor apartment to the basement laundry room in their Long Beach, California residence to add fabric softener at just the right time.

In those days, (in case you‘re not old enough to remember), you had to catch the washing machine just before the final cycle to add a cap full of liquid fabric softener.

Conrad was a veteran of the soap and laundry detergent industry, so he was equipped with the knowledge to help his wife. He found that adding the fabric softener to a piece of cotton flannel and tossing it in the dryer spread the softening agent effectively just enough to get the wrinkle of of the clothing. This discovery led to a US Patent for the methods behind his prototype ‘Tumble Puffs’.

Gaiser would sell the patent to Proctor & Gamble shortly after he received it in 1969.  P&G took Conrad’s efforts and ‘got the wrinkles out’ before launching their ‘BOUNCE’ brand of fabric softener sheets nationwide in 1975. 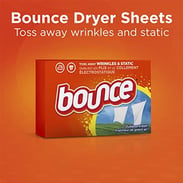 In 1972 the engineering team here at ELSNER designed our first rotary perforator for integration into our workhorse rewinder, the V-4-30. 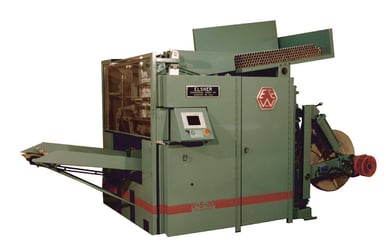 Fabric softener sheets on a roll were one of the first products to make use of it.  The variability in the material, irregularities in the coatings and the need to offer varied sheet lengths and perforation patterns made this a challenging task.

Not to brag, but the perforator our team came up with is a pretty great design.  After building and testing the first unit, it was learned that heat build-up changed the cutting action of the revolving blade against the stationary bed knife.  Initial attempts to overcome this challenge involved heating the bed knife.  A lasting solution became creating an oil bath for the rotary knife bearing assembly.  Pre-heating the bearings before adjusting the cutting action of the knives ensured that the assembly would not ‘heat up’ any further as the production day carried out.

At ELSNER we have been using this same base design for nearly 50 years.  Much like the V-Series design itself, the perforator mechanical design has not needed much revision.

In 2002 we incorporated the perforator design into our first ENR-Series rewinders, dedicated to coreless nonwoven rolled goods production.  The standard material width grew from 30” to 42” and with an increased demand for versatility, servo control was added to allow infinite adjustment of the pitch length.  In 2017 our R&D team took a close look at the reasons behind the heating of the bearings.

Today, it’s difficult to find a canister of wipes that hasn’t been perforated by one of our perforators.

Come visit us here at our factory in Hanover, Pennsylvania to see our latest ENR-G3 that includes several advances that eliminate pre-heat, ease blade change and have other features to help you improve the OEE of your converting operation.

ELSNER Deepens Commitment to Designing and Building Machinery for Filtration Industry ELSNER has...

Over 85+ years of manufacturing converting machinery, ELSNER has quite a list of FAQs! That's why...

When ELSNER developed the ELSNER Tech Center (ETC), we had our sights set on sharing our...